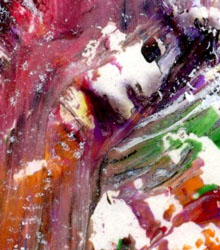 The Rabbit
after Ponge’s “The Horse”
Emily Grise

The rabbit’s eyes are on the sides of its skull, making it a creature
you must sneak up on from the front. If you are waving at him from
across a party, he is probably not ignoring you; likely, he has one
eye on the punch bowl and another on your wife. The rumors of the
rabbit’s sexual immodesty are all true.

The rabbit has mastered the rhythm of consumption, munching greens
with the precision of a metronome. His teeth are the factory workers
of the former Soviet Union. The incisors are the foremen who take more
frequent cigarette breaks, but they all have a sort of upright
patriotism in their white sharpness.

He does not remove his stuffy Elizabethan collar before sleep. This
would belie the work to be done upon waking: a mannered bath with
raisin-tongue, paws revving up to his mouth like the ripcord on a
lawnmower before he labors them with spit and runs them over each
ear all the way to its velvet tip.

Have you seen the rabbit’s tail? Do you know its sad comedy? Beneath
that fluff, just a pink filament of flesh. Do not, under any
circumstances, get it wet; its droopy pathos is too much. The rabbit
keeps his tail behind him for this very reason.

The rabbit, in great joy, will fling his hindquarters upward and twist
just enough to surprise himself with where he lands, looking around
each time at a new world. Sometimes there is a circle the rabbit would
like to run in, and he will run in it until he no longer wants to, and
then he will stop. He is not doing math in his head as he runs. He
feels the spring and snap of his leanness and perhaps the brief pang
of lost love.

Rabbit, I think I am saying I would vote for you if only I had a better
grasp of your platform.

Rabbit, I think, if you were my father, we’d go out to lunch every week
and despite our labored conversation, I’d kiss your furry cheek before
I hurried out of your car.