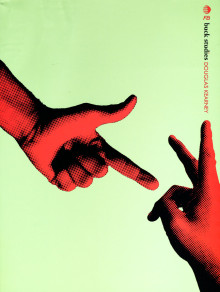 For this semester’s Distinguished Visiting Writers Series, the LSU English Department brought the inimitable Douglas Kearney over to lead workshops, give craft talks and, of course, perform the house down. Assistant Poetry Editor ava hofmann had the chance to talk to Kearney about corporeality, Futurism, typography and the breakthroughs that can come from “banging shit together,” among other things.

ava hofmann: How do you think about bodies—your body, the reader’s body, black bodies, the “body” of texts—when composing your work? What does such a model of the body try to achieve in your poetry?

Douglas Kearney: With The Black Automaton, I felt like bodies were mostly abstracted. There were speakers, points of view, etc. But flesh was often filtered through the artificiality of automata or off-camera, on the cropped margin of the poem. Patter thrust the body back into view. I was thinking a lot about CM Burroughs’ The Vital System as a means of understanding the body as a site of danger and pleasure. Tisa Bryant once described Patter as “anatomically democratic.” That seemed right to me. Mess and Mess and sort of held The Black Automaton and Patter in each hand and allowed me some space to think of the body as concrete and abstract, not as metaphor, per se; even the abstractions point to grappling with real violence (more, I’m afraid, than with pleasure), but as a means of knowing, I suppose. But I have to say that the order of publication wasn’t necessarily the order of composition — not totally. The “Stagger Put Work In” poems from Buck Studies were done before quite a lot of Patter was even written. And for the longest, I imagined that series as the hub for the manuscript that became Buck Studies. That changed for a lot of reasons, mostly, though because of bodies.

A student of mine, Morgan, really challenged the use of “bodies” when describing Black folks. She insisted that if it acted as a metonym, it still punctuated the part that mattered to the discourse, absenting mind and, depending on who you ask, spirit. So if I say “Black bodies,” I feel like I have to be saying “Black corpses,” and if I’m talking about my poems, usually I would be meaning “murdered Black people.”

I’ll tell you, I have a series of things; they haven’t come out yet, but I think they’ll be called “(an)aesthetic.” They are basically a series of tables. Each table names a location or condition — “hard surface” or “vegetal surface” or “burning.” The first column describes the posture of a corpse. The next column suggests a “vehicle” (as in the metaphor’s equation). Following that are a series of variations — one eye opened, mouth open, tongue out — depending on the position and condition. I have a weird thing, a kind of mild allergy to metaphor, and this project forces me to come up with about a thousand discreet ones.

ah: You borrow quite a few visual techniques from the Italian Futurist movement. How do you deploy or redeploy their fascist aesthetics—their vision of a techno-authoritarian future of patriarchal violence and acceleration—towards resistance-laden ends? As an artist, how do you navigate ambiguous relationships and the troubling aspects of literary genealogies?

DK: English has a pretty troubling genealogy, literary and otherwise.

I think if I can manage working with that, I can manage articulating a politics distinct from that of the Italian fascists when I set a line of type at an angle.

Additionally, I work in pun, which I think slows acceleration—you have to go back and consider the possible meanings. There’s polyvalence, not single-mindedness. It’s incredibly inefficient if you’re looking for a rocketing to the future. In recent years, I’ve been thinking more about, say, the accumulation of texts associated with a wall of graffiti. These spaces, and the poems I write that are inspired by them, may resist a compositional hierarchy. I’m trying to get better at that—but it’s tough sledding sometimes. It might be that I must trace the contextually-related, little flows of associative conversation and alteration throughout, while being willing to abandon those flows before they become hermetic poems in and of themselves. But, to return to your question, I don’t know that without reading what folks have written on these walls, that by simply seeing a mass of motley texts in that arrangement — I don’t know that you could have much to say about the politics of it. Just imagine the different texts you’d see depending on what bar you were visiting. There might be some symbols thrown around, but otherwise, I wonder whether you’d be able to tell—formally—who was arguing for what besides making marks.

Still, your question makes me wonder whether the poems I make are authoritarian, techno or not. I have, depending on the series, read poems only as directed by audience members. This, in my view, emphasizes not that they are telling me how the poem goes, but telling me how they think the poem might go. This is an important distinction. When I read other poems that are typographically performative, I read them differently every time. I am trying to decenter the notion of a “master reading.”
What drew me to the Futurists was their rethinking of the typographic grid. That was my non-Italian-reading-ass response to what I saw. And after learning more about them, I found I had no reason—what with a history of graffiti that goes back centuries, and rich histories of signage and comic strips—to imagine that a line set at a diagonal against a baseline means the same thing politically as Italian Futurism. They may have thought they were inventing something. That doesn’t make it true.

DK: Excellent question. I think illegibility is a way for me to think about desire. We want to see, understand, and low-key possess what the illegible hides. Sarah Vap compellingly genders this in End of the Sentimental Journey.

Also, I’d argue signifyin is often about the play between legibility and illegibility. It’s a way of thinking about audience—being read and mis-read.

I have a book of opera libretti, Someone Took They Tongues. In it, there’s an opera called “Benbannik.” That whole thing is written in a language I invented. The English translation is present, though! It’s occluded at times by stage directions. In the performance, I imagine the projected supertitles of English would be similarly obfuscated by the actions of particular characters. I wrote the first version of this as my MFA thesis at CalArts in 2004. I was determined to make a viable language, one based on Afro-diasporic sources, that would sound just familiar enough that people would be allured by it. I don’t know that I succeeded, but it drove me to ask lots of question about the role of the interpreter, the native guide who provides access to cultural secrets and treasures to outsiders. This is a position that I think scholars of color often find themselves occupying. I am fascinated by this.

DK: That’s a great question — I mean these are all compelling. But this one! Hmm. I love sound as a means of making and recognizing sense. At the level of the line or phrase, I am banging shit together to hear it ring. I’ve been thinking a lot about podics as opposed to the Greek meters. Well, in truth, I think about hip hop cadence, but I think podics are useful to this end, even without proposing them as analogous. When I am writing, I feel like I’m picking through layers of music and ambient sound. Yeah. Breakthroughs are — somatically — moments of giddiness; when the breakthrough knocks down a wall between me and horror, that giddiness is closer to queasiness. If either of those experiences follows a moment of surprise, I think I might be near a breakthrough. Then, I clap my hand over my mouth and cuss a lot.

ah: What’s a work of art or writing you feel ambiguously about, something that you could not earnestly recommend, but which still provokes something in your practice as a poet?

DK: Glyn Maxwell’s On Poetry. I throw all of these qualifiers ahead of talking about it, but I like it. I’m not sure which part of this is a failure: my reticence about recommending it without “framing it” or the fact that I would recommend it. Maybe it’s both! And what do I mean, “failure”? Wheee!

Douglas Kearney has published six books, most recently, Buck Studies (Fence Books, 2016), winner of the CLMP Firecracker Award for Poetry and silver medalist for the California Book Award (Poetry). BOMB says: “[Buck Studies] remaps the 20th century in a project that is both lyrical and epic, personal and historical.” Kearney’s collection of writing on poetics and performativity, Mess and Mess and (Noemi Press, 2015), was a Small Press Distribution Handpicked Selection that Publisher’s Weekly called “an extraordinary book.” Raised in Altadena, CA, he lives with his family in the Santa Clarita Valley and teaches at CalArts. douglaskearney.com.

ava hofmann was born and raised in Oxford, Ohio. She has work published or forthcoming in Grimoire, cahoodahoodaling, Palimpsest, and GLINT. Her poems try to extract radical-queer/trans imaginary archives from the weird, forgotten, and broken depths of literary history. You can follow her intermittent activity on her twitter, @st_somatic.