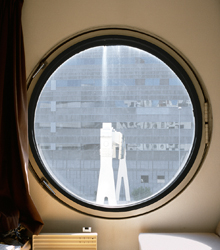 We met over the kitchen sink at a house party, me sucking chunks of ice, make-believe medicine for my damaged teeth, which were darker than yellow then. We knew nobody there: the shipbuilders, welders, crew managers of this or that, people with metal on their breath holding cups of beer, people with jobs. When you spoke, your necklace knocked against my chest. “Another party crasher,” you said, as if we were two thieves looting the same house, and after that I wasted no time.

We showed each other what we were made of in the basement, on a couch patched together with black tape. Luck was long-lost family to me, and I was scared you’d taste the color of my teeth in the dark and that would blow it, but you kept on, while smokers stood around the grate upstairs, listening to our progress. Afterwards, we peeled the bandages off the couch, folding fluff in our hands, and you told me about the lost town beneath Smith Mountain Lake, where the houses squat in the shade of fishing hulls the way they once idled under clouds, their mailboxes collapsing under ninety feet of water. You said that on days after a storm, instead of stripers, anglers would catch old clothes loosened from the bottom. The thought of the dead, awake but confused, watching their clothes fly into the air or bass hover on their lawns, cut to the recent fear I had: that I’d die and live on a hundred years and still be eating on food stamps.

We were hungry, so I drove us to the Burger King by Ocean View Park, where I could sink my feet into the bay, remind myself the water was around my ankles, not overhead. In the lobby I ate a handful of ice from the free dispenser while you paid for your food. I had a dollar someone at the house had given me thinking I was responsible for beer, and I pushed it on you, mumbling you didn’t owe me for gas. You asked why I chewed ice, and I said it was like the way some sick people cured themselves with sugar pills, just by believing they’d get better.

The beach was cold, so I took off my clothes in the dark by a fat little palm tree and wrapped you. Your face showed, asking what if you got pregnant. I said if it happened I’d get a job, maybe on a ship – built as I was for punishment. To make you laugh, I did a naked flop into the Chesapeake, where the current grabbed hold, dragging me out from shore. I thought floating might save me. I didn’t shout, like I wouldn’t later after the kid was born, or after the bills for what the ice did to my teeth wiped me out, including the money I had made in my first months as a deckhand, or after that, when you moved back to Roanoke and everything fell apart, as I’d known it would.

I coasted, one in the current, saving my strength for the long swim back.