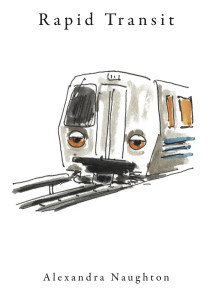 Alexandra Naughton’s latest book, Rapid Transit (Nomadic Press), is a compelling collection of vignettes depicting the vibrant intersections of personal and collective space occurring within public transportation. Set entirely in or around the BART system of the San Francisco Bay Area, these texts, which straddle the line between poetry and prose, offer an account of Naughton’s experiences and observations in the liminal space of the commute. In interrogating this space, which is neither public nor private, Naughton offers complex insights into these categories, how they corrode any neat dichotomies.

At the core of Rapid Transit is the strange world and culture that forms itself inside of public transportation systems, like the BART. Naughton has conversations with fellow passengers, both real and imagined, amicable and less-than-pleasant. The culture of public transit is set against the threat of the increased privatization of the transportation industry, as posed by companies such as Google and Uber. In response to this threat, Naughton skillfully depicts the public in public transportation, contrasted with the melancholy and barren world—the too-private world—of corporatized transportation. To Naughton, the key to these public spaces is that they’re also deeply personal, a place for personal reflection, learning, and growth: here, Naughton goes to work hungover, reflects on childhood memories, sees a baby pigeon for the first time. “It is a bond like family,” Naughton says about her fellow BART regulars, strangers on a bus or a train, “full of unspoken understandings and generosities.”

Rapid Transit’s hybrid form showcases Naughton’s skills as a writer —her keen observational eye and ability to form sharp, nonchalant statements that contribute to a cutting, epigrammatic style— while keeping the text from being bogged down by the conventions of both poetic form and plot. However, at times, the formal choices resulted in the premature termination of compelling pieces of writing. For example, Naughton’s “poem about ‘manspreading’” seemed to function as an opening to a more detailed/grounded text, rather than as a standalone work in itself, leaving the vignette severed from the emotional center of the book.

Naughton’s work is ultimately an argument for the vibrancy of life, and the necessity for our lives to be embedded in public, shared spaces. It centralizes the communal necessity of a world in which we collectively navigate social space, one in which “everything just comes to life.”

ava hofmann was born and raised in Oxford, Ohio. She has work published or forthcoming in Grimoire, cahoodahoodaling, Palimpsest, and GLINT. Her poems try to extract radical-queer/trans imaginary archives from the weird, forgotten, and broken depths of literary history. You can follow her intermittent activity on her twitter, @st_somatic.