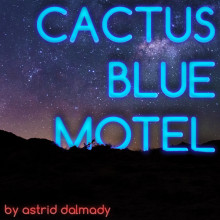 “Somewhere between New Mexico and Arizona, three friends were driving through a barren desert of red rocks, and wide empty skies. It was the end of summer, the end of high school, the end of so many things. And then they found the Cactus Blue Motel.”

Astrid Dalmady’s signature style of interactive fiction juxtaposes magic with the banality of middle American life. Her previous works, like Arcane Intern (Unpaid), are tailor-made for the Harry Potter generation, a group who yearns to find a world of magic behind a dimly lit door. Similarly, Cactus Blue Motel presents players with a seemingly run-of-the-mill, edge of adolescence road trip, which quickly transforms into a suspenseful fantasy ride. You play as Maria Elena, a young woman tired of the way her name “sounds on American tongues,” traveling through the southwestern United States with your two best friends for a final adventure before you all head off to university. Taking a much needed break from the monotony of the open road, you stop at an outwardly unremarkable motel, wishing to get a few hours of shuteye before hitting the pavement once again. But as darkness falls, the mundane motel signage takes on a fantastic display: “Neon bloomed into the desert. It started small, like a flickering star, but it began to grow, as if neon tubes were being spawned from nothing. Above the cactus, a blue flower began to grow, petals spread towards the night sky.” The motel’s mystical neon sign illuminates the various eccentric residents who have permanently settled into the motel’s vintage-kitsch accommodations, and you learn that it is not just the neon that buzzes in the night.

Cactus Blue Motel is the 3rd place winner of the 2016 Interactive Fiction competition, and for good reason: Dalmady’s prose is succinct in storytelling and vivid in descriptors, both of the motel’s run-down kitsch and its charming guests. The gameplay itself is exploratory; created using the Twine software, players click through various options regarding where to go, whom to speak with, and what to say to them from a predetermined list of choices, thus creating their own branching path of narrative. These choices, and the answers you receive from guests, are just ambiguous enough to solidify the mysterious lure of the motel, while also transporting players back into their teenage years—a confusing whirlwind of immediacy where everything must be felt here and now. Every conversation with your friends, Becky and Lex, seems to teeter between existential ennui and adolescence heartbreak. Though they separately urge you to consider staying for a longer time at the motel, you learn through Maria’s exposition that this desire is out-of-character for both of them. Furthermore, you soon discover, through various conversations with your two friends, the underlying cause of frustration for each of them which makes the permanent escape Cactus Blue Motel offers seem like a viable option. Yet this, combined with Maria’s confusion about her sexuality and her place in the world, leaves the player feeling as indecisive as Maria on whether to remain at the motel, or to continue on the road to adulthood.

Even more confusing is the titular motel itself; in clear homage to The Eagle’s “Hotel California” (“you can check out anytime you like…”), the motel houses a woman whose face is perpetually covered in smoke, cable televisions that air the nonexistent third season of Pushing Daisies, and a manager who reveals that he first stopped at the motel on the way to the California Gold Rush. As one guest puts it, “Outside, the world is all rough edges and blaring lights. Here everything is fuzzy from the neon.”

Indeed, in many interactive fiction games which boast multiple endings, the morally correct choices are all-too-easy to determine, and thus receiving a “winning” ending is an embarrassingly easy feat. But despite Cactus Blue Motel’s eight possible endings based on what combination of you and your friends decide to stay, it remains unclear what, if any, is the more favorable ending, or what choices determined where you landed. The mechanics remain just as enigmatic as the motel itself.

Visually, Dalmady has used the affordances of Twine’s stylesheet to her advantage, as the work displays a black background with select titles and choice options in the same ominous blue neon glow as the motel’s famed sign. This style adds to the atmosphere of the piece; as you traverse the labyrinthine text, the constant glow from the blue neon sign-style font is sometimes a beacon of comfort bathing you in blue and helpfully guiding you towards the next page, and sometimes a sinister eye of Sauron judging you for every incorrect choice. Either way, it makes for a pleasing aesthetic through which Dalmady allows us to explore the clandestine magic that underlies Maria’s journey of self-discovery.

Taylor Orgeron is an English Ph.D. student at Louisiana State University. Her areas of interest include 20th and 21st century American literature and new media. Most of her work deals with the intersections between American culture, literature, and video games. Other activities include lamenting the popularity of the first person shooter genre and spending time with her dog, Bayou Teche.