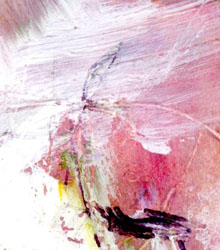 Interactive Keyboard Project, or IKP, is an acoustic-linguistic keyboard consisting of twenty-one alternating light and dark wooden keys, two control dials, and a record button and indicator light. Conceived as a site-specific installation for Labor Party, a group show held at a 30,000 foot industrial space in Brooklyn’s Bush Terminal complex, IKP allows users to activate two distinct sonic registers. The dark keys correspond to the deconstructed text of archival newspaper articles describing a devastating fire that took place at Bush Terminal in 1904. The light keys activate disembodied soundscapes reminiscent of the industries one might have encountered at Bush Terminal in the early twentieth century. IKP’s dials control the pitch and volume of the keyboard’s output, allowing for a wide range of acoustic variation. And finally, the record button allows the user to save her original acoustic-linguistic composition as an mp3 audio file.

Created in collaboration with the sound artists David and Tara Gladden, the soundscapes began as original recordings made at the Bush Terminal warehouse that were then processed in the studio. By de-composing the text of newspaper media from the early twentieth-century and re-composing it through contemporary technology, Interactive Keyboard Project posits language as a dynamic material existing in time. Like the destruction and reconstruction of the Bush Terminal complex itself after the fires of 1904, language is degraded and transformed. IKP’s interactivity further undermines authorial intent by allowing the user to manipulate language herself. “Reader” becomes “user,” upending the conventional reader/text relationship.

In Interactive Keyboard Project, a poetics of fragmentation, erasure and palimpsest each find their digital correlate. The keys are only sounded so long as they are depressed, allowing the user to fragment the textual register mid-“line,” or even mid-word. With the pitch dial users can “erase” language by transforming the texts into “illegible” electronic tones. And finally, IKP is completely polyphonic–when each key is depressed simultaneously, all are sounded—inviting users to superimpose layers of text to create an aural palimpsest.

The design of Interactive Keyboard Project is comprised of three interrelated components: the wooden housing and mechanically responsive keys; the circuitry that wirelessly streams user input to a Make Controller board; and the Max/MSP patch that interprets that data on the fly. IKP’s minimalist wooden exterior was inspired by the ondes Martenot, an early electronic musical instrument whose eerie, electronic tones are produced through the manipulation of vacuum tubes. The Martenot’s innovative technology is hidden behind a beautifully wrought wooden exterior that situates it explicitly in the classical tradition of the piano. I was drawn to this juxtaposition between cutting-edge technology and classical tradition, a temporal inversion that imbues the Martenot with an uncanny anachronism. By encasing the technology that powers Interactive Keyboard Project within its hand-crafted wooden exterior, I sought to recreate this effect, in which the haunting refrain of early twentieth century industry reverberates in and through twenty-first century technology.

In order to share IKP with readers of New Delta Review, I’ve created a software application that simulates the original keyboard, allowing users to try the keyboard out for themselves. Check out the video demonstration of the IKP simulator, and download a copy of the software application to play it on your computer.