The room was lit
when I lost
you.

Ants have drawn a waving black line
from the glue round the letter
to last night’s crumbs on the table
to the wide open door. 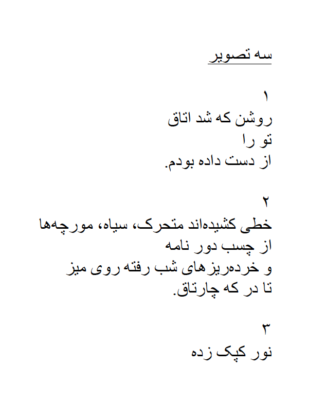 The snow whitens in the light:
Windows.
Your absence!

You are here and on the word’s tip!
Black:
a dream of roots. 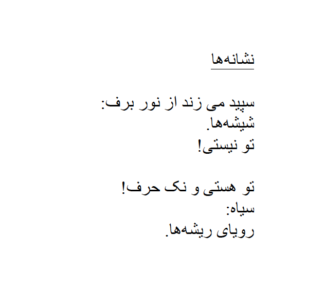 Hasan Alizadeh (b. 1947, Mashhad, Iran) has left a poetic signature on modern Persian poetry distinguished by lyricism and colloquialism. Alizadeh embarked on a literary career initially as a short story writer, and cultivated his writing talents alongside the notable Iranian novelists Reza Daneshvar and Ghazaleh Alizadeh in the literary circle that developed in their hometown of Mashhad. Since the early 1990s, Alizadeh has focused on poetry. In Alizadeh’s poems, a labyrinthine memory, structured by the intricate architecture of old Iranian bazaars and mosques, continually revises itself in spontaneous narrations of love and death.

Kayvan Tahmasebian is an Iranian poet, translator, and critic who was born and raised in Isfahan. He is the author of Isfahan’s Mold (2016), on the short story writer Bahram Sadeqi, and Lecture on Fear and Other Poems (2019). Tahmasebian has also translated Beckett, Rimbaud, T. S. Eliot, Ponge, and Mallarmé into Persian. His work has appeared in or is forthcoming in New Literary History, Modernism/Modernity, and Twentieth Century Literature.

Rebecca Ruth Gould’s translations include The Prose of the Mountains: Tales of the Caucasus (2015) and After and the Days Disappear (2016), and, with Kayvan Tahmasebian, High Tide of the Eyes: Poems by Bijan Elahi (2019). She teaches at the University of Birmingham and is the author of Writers and Rebels (2016) and The Persian Prison Poem (2021).