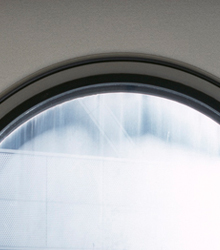 This is what I do not want to admit: I have a crush on my twenty-one-year-old Mennonite mechanic. I made a deal with god the last time I left the auto shop. If the car breaks down again, in the next three days (I thought I was safe), then I go back and throw myself at that boy’s feet and beg for mercy. That night I was driving home from rehearsal and my left turning signal sped up—one of the bulbs was out. I looked to the heavens and cursed god with a capital G, the white-bearded old man from my childhood. “Are you tryin’ to get me a first class ticket into Hell?” I yelled, shaking my fist out the window.

I didn’t go to Harlan. The blinker could wait. It still let people know I was turning, only at twice the normal speed, the way my heart beats whenever I watch Harlan straighten from under the hood of some wreck when he sees me coming his way.

I couldn’t go to see him no matter what my blinker said. I knew his family was pressuring him to find a wife; I was afraid I might make an offer. I could joke and say white bonnets are not the fashion statement I want to make in this lifetime, but the conundrum is deeper than that. I decided to leave New York City and move to Geneva, New York. I think of that choice, leaving the only home I’d ever known, the tall buildings, the pollution, the bad boys with whom I could flirt and move on, the ocean a short distance away. The twenty-four hours, seven-days a week stimulant designed to delight even the most difficult customer.

In Geneva, the town still reeling from the economic downturn in the 1970s, time stands still and every meeting feels full of import. Perhaps it’s only because I feel so alone as I walk past empty buildings and down creepier alleyways than I’ve ever seen in New York City. I’ve chosen the life of a monk though it’s not what I want. I’m in my prime I want to trill in a Scottish Jean Brodie accent. I am in my prime, but after experiencing New York City’s finest and not so fine, no one up here has caught my eye.

At first glance, there is nothing spectacular about him. He’s 5’4” to 5’6”, tops. He has light blond baby-fine hair, pale skin, a too skinny body, blue eyes—well, maybe the blue eyes are spectacular.

But what he has that none of my NYC flirtations had is serenity. Not the “God, grant me the serenity” vibe of perpetual twelve-steppers, but the eye of the storm kind of calm. I’m drawn to him even when I don’t want to be. I’m old enough to be his mother, I think. I’m going to hell for even thinking what I think.

His brand of serenity is new to me. I don’t know anyone so sure of quiet.

I grew up in a maelstrom and have been thrown into one person or another’s storm since that time; the men whirl crazily until they spin out of my life or their own. But in Geneva, where my aloneness cannot be hidden in subtitled movies or working eighty hours a week or a date with a different man every night, I feel my spin. I am alone. It’s not new. It was the choice I made when I was eight. I’m never getting married, no way, unhunh, I don’t want kids because I only saw husbands and wives who argued due to disappointment, and kids who were afraid. That life wouldn’t be my life and I managed for thirty-four years to keep the promise an eight-year-old made to herself while picking daisies at a convent in Amityville.

That eight-year-old sees in Harlan a second chance, a way to get out of the vow made out of desperation rather than surety of self. Don’t get me wrong. I’m not so naïve to think that life with a Mennonite would be rosy; I still don’t want that kind of fashion statement. Besides, Mennonite women look unhappy, like squeezed lemons, their mouths a big pucker. But I’m not talking about marriage and eight children and life without the Internet. There is something else underneath the mundane that I’ve always known existed and I sense it the moment I get out of my car, a look of pain and disgruntled frustration across my brow, and Harlan stands as tall as he’s able as he wipes his hands on a greasy rag and looks directly at me, no artifice, no what am I gonna get out of her. All he wants to know is what’s wrong with my car.

A few weeks before the turn signal went on the blink, we had been alone in my convertible, the top up; it was late autumn, and snow would start falling soon enough. He was behind the wheel and I was sitting in the passenger seat as we drove down one of the back roads that promise open expanses of farmland. The car had been bucking in the moist weather. I feared the worst, the transmission, and I wanted him to reassure me.

“It’s not the transmission,” he said evenly, both hands on the steering wheel. “Hear that?”

I listened closely, wrinkled my nose in concentration, but didn’t hear anything out of the ordinary. “Yeah, I think so.” I paused between each word.

He smiled at me, his blue eyes twinkling. “The transmission is doing what it’s supposed to. I think it’s the spark plugs; maybe you need a tune-up.” His smile faded and he watched the road in front of us.

I studied the grease mark on the right side of his forehead; the way he must, out of habit, wipe that place when he’s working on a car. “You lived in NYC?” He interrupted my gaze.

It was my turn to smile. I’m an oddity to most Central New Yorkers, not just Mennonite mechanics. “Yeah, my whole life. Pretty weird to see someone like me up here, I guess, huh? But I just didn’t want to be around that many people anymore. I couldn’t take it. I’m starting to think there are too many people in Geneva for my liking.”

He pressed his lips together as if holding onto a secret and I asked him if he’d ever visited New York City.

“Once we went down,” he said. His secret disappeared behind a jaw lock. He knew I thought he was a country bumpkin. I realized how we both were thinking the wrong things about each other.

“I lived in Europe a little while before I came up here. I know you’ve traveled here in the U.S.,” I said, making a peace offering. “But you’ve never been out of the country, have you?”

His jaw flexed and a huge grin overtook his face. “Yes, I have. I went to Costa Rica when I was eleven. Our church has a mission and my brother was there.”

“It must have been beautiful.” Romantic notions of foreign travel filled my head.

“It was different than here, that’s for sure,” he said, his more practical demeanor bringing silence to the car.

The air vibrates between us and in the days and months that follow there will be longer moments when we’ll be alone with my car in the shop. His parents will be away, visiting relatives in Pennsylvania Dutch country or getting their teeth cleaned. We will flirt shyly and once, he will even throw a glove at me, just like sixth grade boys do when they’re in like. There will come a time when I will leave my car for an afternoon and when I pick it up, I’ll sign a check for all the money in my bank account and not care at all. I will have been able to spend part of my day with him. A few hours later, he’ll call and say he’s left his tools under the hood of my car. When I go out to look, I’ll find two wrenches still attached to my motor. He will come to get them and we will be alone in my house. He will stand at my front door, the negative twelve degree temperature calling him inside, and I will look into his eyes and say, “What are you thinking Harlan?” And he will look down at his feet, one foot reaching for the other, his wrenches in his left hand, and say, “I don’t know.” The confusion will be so palpable I will want to reach out and hold him, but instead, as he looks up at me, meeting my gaze with only pain and longing, I will let him leave to fill a shopping list for his mother at Wegmans.

I’m entranced with Harlan. I feel his faith in the quiet wash over me and I want to know more. I’m stuck like a broken record. What comes after that? I don’t know. But the truth is I’ve never known. There’s a clock in me that believes forty-two is too old to fall in love, to have that moment when you see someone and they look in your eyes and you start a conversation that will last a lifetime.