The winner of our 9th Annual Chapbook Contest! Jos Charles, the judge of this year’s contest, writes “Alone in the White Marble City reflects, nearly, those midcentury poems of place and one’s, not apolitical, relation to it: the matter-of-factness of Williams, Olson. Kosinski’s verse however avoids the nostalgic in favor of critical, attentive speculation. The white marble city appears as a near non-place whose scaffolding is familiar even as the building is not (“Our creed goes: ‘Water only / what one could easily obtain / again elsewhere’”). The logic of this city everywhere withdraws even as the text urges us on to account for such logic at seemingly every register. Images, diagrams—lacanian? scholastic?—pepper throughout. In one image, five circles cling above four more, between them appears the word CLEAVER, and beneath, it reads: “There is a terrible power in this. We accept / some slippage in a metaphor.” Alone in the White Marble City is a documentation of slippage, between this world and that, and how we have come to accept it: the terrible power in this.” For a preview, check out this excerpt, which was published in our latest issue. 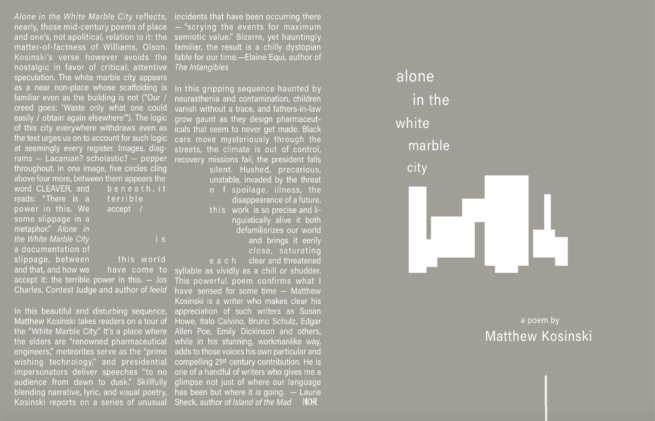