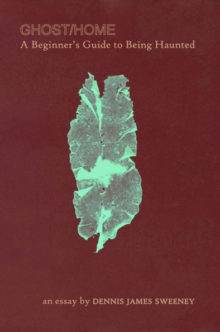 What does it mean to have a chronic illness? How can we relate to a body that destroys itself? There is no singular answer, and yet, by the end of Ghost/Home: A Beginner’s Guide to Being Haunted (Ricochet Press), Dennis James Sweeney has given us an answer, one that values feeling the body over knowing it.

“The ghost was in the moodiness of my illness, in its sudden unpredictability,” he writes. “The ghost did not like to be known.”

To give up the ghost is to let the spirit of a thing die, to become hollow. The origins of the idiom can be traced to the King James Bible, in which a crucified Jesus accepted an offer to drink vinegar wine—a common numbing agent at the time—signifying acceptance of His impending death, and said, “‘It is finished’: and he bowed his head, and gave up the ghost.” In Ghost/Home, Sweeney urges us to consider its opposite: to accept the ghost, to invite it inside, to let it fill us up.

An essay in three parts—“Getting to Know Your Ghost,” “Between Ghost and Home,” and “What is Left Out Is the Haunting”—the chapbook teaches us how to live with the ghost, or rather, teaches us why we ought to try.

Written like a lyrical instruction manual complete with diagrams for reference, Sweeney begins by doing what he ultimately suggests we not do: he tries to identify—and by extension understand—his ghosts. But ghosts are inherently unidentifiable, enigmatic, shapeshifting. And so he explores the many iterations of ghost, from former selves to romantic love to home. But his central ghost is chronic illness, and all of its complicating, existential implications.

Having Crohn’s disease, an incurable, gastroenterological autoimmune disorder, Sweeney’s health is in a constant state of flux. Like a ghost, his chronic illness is both unpredictable and unknowable. “I didn’t know I was a ghost, which is what made it a ghost,” he writes. “It was indistinguishable from me.” He successfully allows the frictions of chronic illness to exist all at once. To be ill is to be both separate from and connected to the disabled body. By objectifying the I, Sweeney manages to subtly uphold a Cartesian separation of mind and body while also acknowledging their codependence.

But ghost is not limited to the deviance of illness, the “abnormality” of the disabled body. After a long period of being bedridden, Sweeney visits his doctor, who makes visible the invisible symptoms of Crohn’s through a (presumed) colonoscopy and prescribes new medication: “the pills looked like circles, who knew what was in them. They were sending in an army of ghosts.” Treatment for the uncurable is as ghostly as illness, both in its invisibility and its unknowability.

So where does the ghost reside? Hauntings are everywhere in this chapbook, from Sweeney’s romantic relationship to his parents’ new home decorated with the furniture from his childhood to personhood itself—“I am already a ghost when I visit [home]. I am the appearance of a memory, manifest for an instant but most of the time only haunting.” Ghost and home begin to conflate, sharing not only “the same central vowel,” but also “an empty stomach, an empty dwelling, shaped like a pill. A place to get in but not stay too long.” And like any home, a romantic relationship must be a shared entity, even in the lonely experience of pain.

Ghost/Home is in direct conversation with Clarice Lispector, and not just through the ruminations on haunting. The second section formally splits the page: on the left side, a continuation of Sweeney’s personal narrative; on the right side, a narrow column interrogating Lispector’s first and last works.

The first column follows Sweeney to his hometown of Cincinnati. Too sick to compete in a race he participated in the previous year, he joins the onlookers to stare at versions of his former self, of selves not inhibited by illness. After the race, to his surprise, his digestive tract seems to function well, a rarity for that year. Optimistic, he searches for understanding, googling possible reasons for his newfound health, only to get sick again a few days later. “A ghost never settles,” he writes. “The ghost doesn’t want to be called a ghost. It doesn’t want to be called at all.”

In the second column, Sweeney points to Lispector’s own literary cyclicality, her last novel an echo of the first, her characters ultimately giving up the ghost. Having these two columns share space, Sweeney further complicates the idea of haunting: can two things exist in one body—in this case, a body of text—at once? It is impossible to read the two columns together, page by page. One column must be read in its entirety before beginning the other. Sweeney makes us participate in Lispector’s cyclicality by having us read the same section twice, forcing us to answer that question with a resounding yes.

For the first time, Sweeney questions these implications outright: “But what if we do not have to give our ghosts up? What if getting old means living with the feeling? What if, the more I am haunted, the better I understand that I must live alongside what I cannot contain of myself?”

By the last section of Ghost/Home, the expansive terms Sweeney is exploring become interchangeable: ghost as home as illness as love as understanding as belonging as haunting as longing as feeling as embodiment as other as self as past selves as aging as symbiosis. And though it’s hard to understand how these varied words with their disparate definitions can share the same meaning, it feels like it makes sense. After all, how can we demarcate amid a flurry of intangible things? The words coalesce and hang and haunt in tandem. Of course they must slip in and out of each other. And that is the true accomplishment of Ghost/Home: it allows us to follow along in feeling.

Ultimately, to accept the ghost is to accept the terms of the body: “More lives in us than we can know, but we are better at feeling than at knowing.” Chronic illness requires a deferment to the body, a trust that the body knows things before its inhabiter. And we don’t need to know the mechanics of a body disabled by invisible illness to believe in it and to live with it.

Olivia Muenz is an MFA candidate in creative writing at Louisiana State University. She received her BA from NYU and is currently the Digital Media Editor for New Delta Review. Her work is forthcoming in Salt Hill Journal. @oliviamuenz

Ghost/Home: A Beginner’s Guide to Being Haunted is available from Ricochet Press (2020).