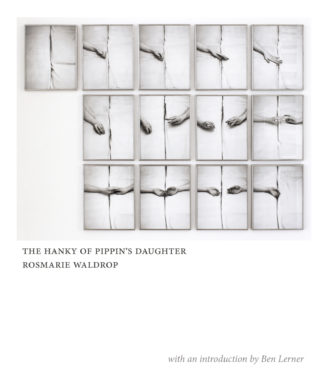 I mean the eternal recurrence of even the smallest, seemingly trivial things, the causal nexus of the microcosm. The circular movement of history. Time closes in on itself and becomes substance.

Rosmarie Waldrop is a celebrated poet, translator, and essayist, although she is not well known for her fiction. The Hanky Of Pippin’s Daughter was largely written off as “a poet’s novel” at the time of its original publication in 1986, and it fell into relative obscurity until its October 2019 re-release by Dorothy, a publishing project. I must confess, as a poet who writes fiction, I immediately felt defensive at such a dismissal. But I can happily say this book does not need anyone to defend it. It is a thing that glistens and refracts, ultimately unraveling many imbricated stories, slowly at first and then all at once.

There are obvious biographical parallels between Waldrop, who was born in Germany in 1935 and spent most of her adult life in the United States, and her protagonist. The Hanky Of Pippin’s Daughter begins in Germany between WWI and WWII, and is told through letters composed by Lucy, the youngest daughter of Frederika Seifert, a woman whose adultery creates questions about the paternity of her elder twin daughters. Lucy writes to one of the twins, Andrea, from her home in Rhode Island, decades after the book’s events take place, as a way to understand her parent’s destructive marriage and their support of Hitler’s rise to power. For reasons unknown, Lucy, a woman with a horrible memory and a proclivity for wild philosophical digression, is the keeper of her family’s history. Matters are made more complicated by the fact that her twin sisters’ father is likely Franz Huber, a Jewish man and the best friend of their supposed father. Both Andrea and Lucy grapple with grief and shame, which cannot seem to be assuaged by time or religion or their own forays into adultery.

Lucy writes: “As my memory lumbers toward them, the parents retreat a little farther each time. They leave an image I pounce on, happy for a moment till I realize it’s a decoy. A decoy I have manufactured. The world vacant because I refused to see it earlier.” This is how it always is: our memories of our parents are never the same as our parents. How could they be? But wherever memory fails Lucy, she takes it as a cue to make a more elaborate decoy. She builds and builds, fabricating lush stories with detailed dialogue that took place many years before her birth. It is possible to read large segments forgetting that the stories are of Lucy’s imagination until she reminds us: “Josef got on his motorcycle. Wrong. He didn’t have that until later. By train then, an hour or so.”

Composed of more than one hundred letters, each fragment opens up like a miniature world. Many of the sentences, too, seem to contain a microcosm of the whole. In a section titled “PORTRAIT OF FREDERIKA AS A CONTROL TOWER:” their mother is described as “a structure like a glacier, transparent from long-continued compression, rises on the field of an enormous clock. From a distance, nearly promising warmth.” This description is complete, a tiny pool that captures some version of both the central question and answer of the book. And yet each section feels this way, as if it were a distillation of the whole, and although we seem to be circling the same question over and over again, it feels sumptuous rather than repetitive.

Lucy’s ceaseless attempt to distinguish one thing from another, one memory from another, one twin from the other, is what creates this stunning bricolage portrait of her family. She tries to boil each person down to a singular defining act, each object to its defining use—a hanky, a knife, a brown dress with a gold cord around it. And yet, she is tormented by her inability to truly define things, writing: “Can I possibly isolate any one particular event as the cause of other particular events? Construct a different family myth out of one little sentence?” It seems she has no choice but to keep returning to Frederika’s infidelity, to King Pippin’s daughter dropping her hanky from the tower, to her parents’ decision to support Hitler. It is agonizing to see Lucy try again and again to follow a single thread back to its origin only to return to the same list over and over—Dachau, Buchenwald, Mauthausen.

Elizabeth Kolenda is a poet and MFA candidate at Louisana State University. She has served as Editor in Chief for New Delta Review and tweets @partyantithesis. She has work published/forthcoming in YES Poetry, Bomb Cyclone, Burning House Press and Peach Mag.

The Hanky of Pippin’s Daughter is available from Dorothy, a publishing project (2019).