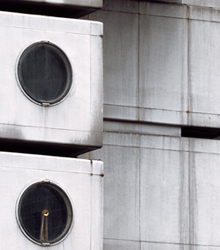 Cachemonet is an exploration into the serendipitous collisions that occur between two randomly generated arrays. The arrays contain a curated mix of bespoke and found .gifs sourced from tumblr and are set to music. The output is autonomous, generative, art made possible through curation & code.

The application explores possibility of human and machine creativity working in tandem. The curation is controlled by human hands whereas the randomized compositions are processed by the machine through code. This juxtaposition of both control and chaos, operating in harmony, ensures that each individual user’s experience is unique yet universal.

Conceptually cachemonet.com is a remix of Internet culture, combining elements from both past and present and is meant to be an aesthetic zeitgeist. The serendipitous collisions that are created become hypnotic and give the viewer a sense that there is both no start and no beginning to the experience, but rather work to keep the viewer focused on the moment.

About Universalscene
Universalscene is a conceptual creative design partnership between Tim Nolan and Jen Lu
find us on the web here.

Tim Nolan was a product of the first dotcom boom, and has been proudly serving the Internet since 1996. Since then he has continued to produce genre-defining work that has reinvented the way people communicate online. Between 1997–2007 Nolan’s personal site spent2000.com helped pave the way for experimental and innovative experiences on the Web. Over the years he has worked in some of the most respected digital and traditional agencies. His critically acclaimed work has been recognized by some of the most prestigious advertising and digital award shows including: The Cannes Lions, The FWA, One Show, Effie Awards, The Webbys & Time Magazine. Tim currently heads up BBH Labs in New York, the innovation unit of the BBH Global advertising network. He also oversees all digital output for all BBH New York’s clients.

Born out of the GeoCities era, Jen Lu had an extensive background in the realm of street art and graphic design before she shifted focus to the web. Her works have been exhibited both online and off and she continues to pursue making work that people love to spend time with and talk about. She is a partner at Universalscene and spends her days creating work for the worlds biggest brands at the highly awarded advertising agency Droga5 in New York City.

Lasse Korsgaard is a Creative Technologist and emerging Interaction Designer. He has spent the last several years experimenting with web technology including creating datamoshes and the world’s tastiest glitches. His latest pursuits involve finding new and exciting ways to bridge the digital with the physical world.

Jib Kidder AKA Sean Schuster-Craig lives in New York City. His work is best described as remixes, experiments and doodlebuddies of Weird World recording and performing as artist jib kidder.